This a summary of Blackball Pool Rules

The fully comprehensive rules can be viewed on this blackball Rules Poster (which has been created in a PDF format suitable for viewing, download and printing as an ‘A3’ size sheet. There’s also a visual guide to the rules.

The Objective of the Game:

Blackball is played with 15 coloured object balls and a cue ball.
The object balls consist of two groups of seven and the black ball.
Generally the group balls comprise one group of reds and another of yellows.
Less often other colours of balls are used such as blue and yellow.
The black ball may sometimes be referred to as the eight ball.
The player or team potting their own group of object balls and legally potting the black wins the game.
Players do not need to nominate any of the shots they are about to play in blackball pool.

The table is comprised of rails, cushions, pockets and the playing surface.
The foot end of the table is where the object balls are placed at the start of a game.
The head end is where the cue ball is positioned when play is about to begin.
The cushions and pockets are considered parts of the head, foot and side rails.
The baulk line is parallel to the head rail. It is drawn one fifth of the length of the playing surface away from the head cushion.
Baulk is the rectangular area bordered by the baulk line and the three cushions at the head of the table.
The head cushion is often referred to as the baulk cushion.
After an illegal or foul shot is played an incoming opponent is given a free shot. That free shot may be played either from the existing position of the cue ball on the table, or from baulk.
When discussing playing options you may hear the words ‘on’ ball.
An object ball is said to be ‘on’ when it is legally playable.
A player is snookered when the cue ball cannot take a straight path to hit at least part of a target ball.
Snookers must be declared as such by a player (and confirmed so by a referee where appropriate) before attempting to escape from said snooker.

Play begins when a break shot is played from baulk.
However, before breaking, it is necessary to determine which player executes the first break shot of a match.
It is the player winning the lag who will decide which player breaks.
Two cue balls are used. Balls are placed on opposite sides of baulk adjacent to, but not touching, the side cushions.
The objective of opposing players is to play their ball to directly strike the foot cushion before returning and coming to rest as close as possible to the baulk cushion.
The lag winner is the player whose ball comes closest to that baulk cushion.
A player may lose the lag if, for example, his or her ball strikes a side cushion or drops into a pocket.

The Rules of Breaking: 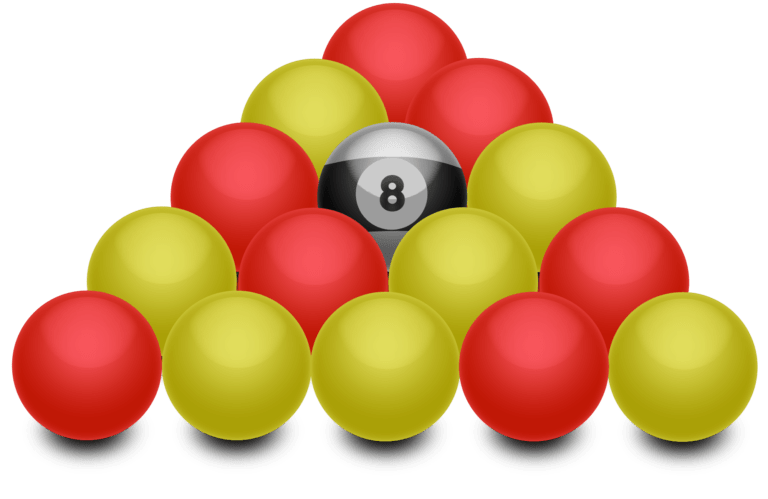 The balls are racked as shown, although reds and yellows may be switched provided the same relative pattern is maintained.
The cue ball begins in hand.
That means it can be placed by the breaking player anywhere within the baulk area.
On breaking at least one group ball must be potted or two object balls cross the centre string. That is a line joining the centre points of the two centre pockets.
When two object balls fail to cross that line, and no group balls are potted, a standard foul is declared.
If the cue ball is potted or driven off the table, then that too is a foul.
More about fouls and their consequences in blackball pool below.
Any fouls on the break are ignored if the black ball is potted.
If that happens the object balls are always racked again and the same player breaks.

In this game players do not nominate their group of object balls.
At the start of a frame, before players’ groups have been determined, the table is said to be open.
The table is open after the break, and remains open until a player pots a ball or balls from only one group in a normal legal shot.
The ball potted decides the group of that player. However groups are not assigned if balls from both groups are potted on a shot, or on a free shot following a foul.

A player remains at the table while continuing to play legal shots, or until the frame ends.
If a player does not pot any ball on a shot and no foul has been committed the incoming player plays the cue ball from its current position.
If a player commits a standard foul, play passes to the opposition.
The incoming player then takes a free shot before continuing with his or her visit to the table in the normal way. That is provided of course the player does not commit a foul in the course of taking that free shot.
In taking a free shot an incoming player may play the cue ball from the existing position on the table or choose to have the cue ball in hand. In which case the player plays the free shot from baulk.
When taking that free shot a player may, if he or she wishes, first strike or pot a ball or balls from the opponent’s group. On a free shot these are not considered fouls.
After a free shot play continues with a normal visit to the table.

There are a number of so-called standard fouls in the game of blackball.
This term distinguishes them from fouls which lead to the automatic loss of a frame.
All standard fouls result in the incoming player receiving a free shot.

During normal play, or when taking a free shot, it is also a standard foul under the following circumstances…

In considering standard fouls it is important to understand the concept of a combination shot.
In normal continuing play, that is when not playing a free shot, a player may strike an object ball from his or her own group and then go on to legally pot balls from both groups in that same shot.
Note, the object ball struck first must be a player’s own group ball, unless a free shot has been awarded.
When balls from both groups are potted in combination, it does not matter which balls fall into pockets first.
Combination shots can also be played involving the black ball. Of course on playing a shot in which the black is potted in combination with any other object ball, the frame is won only if no balls from a player’s own group remain on the table. Otherwise it’s loss of frame.
The term skill shot is also used to describe combinations.

When a player plays a cue ball away from a touching object ball that cue ball is considered to have struck that object ball.
One consequence of this is that the cue ball need not subsequently contact another object ball when executing the shot. Though of course the other requirements of a legal shot must be met, such as striking a cushion.
It also follows that in playing away from a touching ball from his or her own group, the cue ball may then legally proceed to hit an opponent’s group ball. This is possible because the player is deemed to have first struck the touching object ball from his or her own group.

Under certain circumstances a player may automatically lose the frame.
This happens when a player….

In some games a situation may occur when no legal shot is playable.
Whether this happens by accident or design it is a stalemate and the frame is restarted.
The referee will decide whether a legal shot is possible.
The original breaking player breaks again if a stalemate has been called.

Players should be made aware that penalties will be imposed for conduct considered unsportsmanlike.
The referee might issue a warning, call a standard foul, declare loss of frame, or even the loss of a match.
Unsportsmanlike conduct is any intentional behaviour that brings the sport into disrepute, or which disrupts the game to such an extent that fair play is affected.
Such behaviour might include distracting an opponent, intentionally miscuing, marking the table, using equipment inappropriately or playing under the influence of drink or drugs.
This kind of conduct could result in ejection from a competition or even the forfeiture of prizes, trophies and competition points.